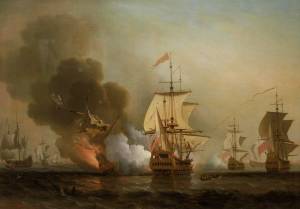 Once again, a shipwreck is making the news. The Spanish treasure galleon the San José was recently found off the coast of Columbia. Early reports indicate that over a billion dollars worth of bullion may be lying on the ocean floor. In all the hoopla over the discovery, to the dismay of many scholars, the story of the San José itself and what the ship’s remains might tell us about the past have become a side note.

The San José was one of many treasure ships that traversed the Atlantic, bringing silver and gold back to Spain from its Latin American colonies. In 1706, the San José set sail for America as the flagship of the treasure fleet. The fleet’s task was to convey long overdue remittances safely back to Spain. King Philip V of Spain was particularly eager to get his hands on this money to finance his efforts in the War of Spanish Succession. His opponents were just as eager to capture the treasure fleet and use the money for their own ends.  The stakes were high when the San José began its return voyage in 1708.

Spanish naval officers knew that English ships patrolling Caribbean waters hoped to intercept the fleet. After much deliberation, the commander of the treasure fleet decided that the fleet needed to commence its return voyage. The first leg of that voyage was from Portobelo (Panama) to Cartagena (Columbia). As the treasure fleet neared the entrance to Cartagena’s harbor, it was intercepted by an English squadron. Battle ensued on June 8, 1708.  Commodore Charles Wager’s HMS Expedition exchanged fire with the San José for several hours. Then, at about 7:30 p.m., the San José blew up and sank. Testimony of English sailors suggests one or more guns on the San José misfired, causing the explosion. Nearly 600 sailors died on board, and nearly 10 million pesos went down with the ship.

This engagement is well documented, because both Spain and Britain carried out extensive inquests into the sinking of the San José. Surviving Spanish officers used the inquest to blame the dead commander for his ill-fated decision to set sail from Portobelo and the ultimate loss of the San José, while British officers pointed fingers at one another for their failure to capture the treasure fleet.

To date these eighteenth-century inquests have been the main source for historians, such as Carla Rahn Phillips, to reconstruct the history of the San José. The discovery of the galleon itself will provide scholars with new details on the San José, its sinking, and maritime culture.

However, what new scientific/historical knowledge will be gleaned from the wreck will largely be determined by the disposal of the artifacts – will they go to a museum or the marketplace?

The outcome is still uncertain. With multiple competing claims to the wreck—private treasure hunters, the Columbian government, and the Spanish government—drawn out legal battles are likely to ensue over splitting the take.  Consequently, the San José will likely remain front-page news for some time. It will not be the only shipwreck in the news either.  Stories of shipwrecks and sunken treasure grip popular imagination and are good press (e.g., Captain Kidd’s Adventure Galley or a Spanish treasure ship off the Florida coast). With each new discovery, though, debate ensues about the proper disposal of the artifacts, the proper compensation for the finders, and the indemnification of the rightful owners.

In light of the historical importance of the San José and other shipwrecks, historians should weigh in on these debates. We have an interest in preserving and protecting “the human history that lies underwater.” These discoveries are a place where historical scholarship has a proven value beyond the classroom: treasure hunters regularly consult historical monographs and even undertake archival research themselves to determine where to dive. Without the painstaking work of historians, the treasure hunters’ task would be even more difficult than it already is. Thus, if there was ever a case for historians to leave their Ivy Towers and enter the public square, this is surely one.

The input of historians will probably make little difference to courts of law weighing the competing claims, but in the public square we might rally more people to support the historical preservation of the San José and other wrecks.  The more artifacts that find their way into museums or are preserved in situ, the better the historical record will be.