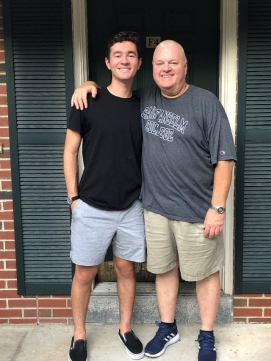 What are your favorite hobbies or activities?
Street hockey, rollerblading, listening to music, trying to become fluent in French (emphasis on trying).

Why did you become a history major?
Though I came in undeclared, I had always had a passion for history. After poking around a few core curriculum classes, it was obvious to me that I had to continue studying what I cared about.

What is one book from a history class that will stick with you?
I had one book from American Women’s History with Professor Salerno called The Myth of Seneca Falls, by Lisa Tetrault. Not only did the book try to correct one of my biggest misconceptions regarding women’s history, but we actually had the author come into class to expand more on her research and ideas. It was an awesome experience and a great book.

What is a fond memory you will have about your time as a history major?
I’ll always remember when Professor Dubrulle won the teacher of the year award at Commencement last year. I was serving as a marshal, so I had a great seat. It made me feel really proud to be part of the department and I think it was an award that reflected everyone’s hard work very well.

If you could live in a time and place that you studied, what would it be?
Easily the 1960s. I would love the chance to see the Kennedy era (Jack and Bobby) unfold before my very eyes.

Do you have any plans after graduation?
I’m hoping to use my experience from my time on the Hilltop to either get involved in college Admissions or work my way into the non-profit sphere of work!