The class of 2020 is having an unusual final semester, to say the least. While it is no replacement for a graduation ceremony, we thought it would be nice to have a little feature for each of our graduating seniors. 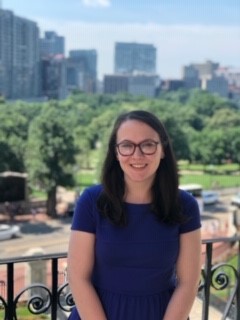 Today’s featured student is Dena M. from Norfolk, Massachusetts. Dena is a History Major with Minors in Politics and American Studies.

What are your favorite hobbies or activities?
Reading, cooking, and baking.

Why did you become a history major?
History was always my favorite subject in school, and I knew I wanted to spend my time learning about something I really enjoyed. Also, I knew that the skills I would learn as a history major would be useful to whatever career I chose.

What is one book from a history class that will stick with you?
The Myth of Seneca Falls by Lisa Tetrault will always be one of my favorites because it changed how I thought about a movement I assumed I knew so much about.

What is a fond memory you will have about your time as a history major?
As much as the process of writing my thesis was difficult, I liked the camaraderie that formed among the other people writing theirs at the same time. We all understood what the other was going through and were willing and able to support and help each other.

Who was the most interesting or intriguing historical figure that you learned about while at Saint Anselm?
I would have to say Mary of Hungary, the woman who I wrote my thesis about. Her story has so many twists and turns, and she was so successful at what she did, I really enjoyed learning more about her.

If you could live in a time and place that you studied, what would it be?
I think I would live in 1960s America. I would want to be able to participate in the social movements of the decade.

Do you have any plans after graduation?
I am putting off having to deal with the bad economy for another three years because I am going to law school.