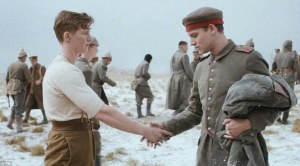 Now that Thanksgiving is over, let us move immediately to Christmas.

It may seem unlikely, but Sainsbury’s, Britain’s third-largest supermarket chain, is using World War I as the scene for one of its latest TV commercials. In cooperation with the Royal British Legion, the biggest charitable organization providing assistance to veterans, Sainsbury’s has produced the following advertisement:

The commercial takes place during the famous Christmas truce of 1914, when troops along some sectors of the Western Front in Northern France stopped the shooting for a variety of reasons. In some cases, Britons and Germans (and to a lesser extent the French and Belgians) called a halt to fighting to recover bodies, send letters into occupied territory, fraternize, exchange souvenirs, or even (although this point is disputed) play soccer. Sainbury’s is obviously proud of this effort, and the supermarket has devoted a prominent part of its web site to the ad which is part of a campaign entitled, “Christmas is for Sharing.”

Predictably, reactions have been mixed. Since the ad was released on November 12, it has been watched over 13 million times on YouTube. Many viewers have expressed positive attitudes toward the commercial. Moreover, the commercial seems to be working. Sainsbury’s is selling chocolate bars in the period wrappers seen at the end of the ad. According to Sainsbury’s, each bar sells for £1 with 50p going to the Royal British Legion; 5,000 bars are being sold every hour. However, Britain’s Advertising Standards Authority (ASA) has received 724 complaints about the commercial as of November 27. The complaints center on two issues. First, the commercial is “offensive.” Second, it is not clear until the end that the commercial is indeed a commercial. While the ASA recognizes that some may find the commercial “offensive,” it “is not likely to break the rules surrounding harm or offense.” At the same time, the ASA also believes “the ad is obviously distinguishable from editorial content and is therefore not likely to mislead.” For more information on the ASA’s stance, see:

The reasons people find the ad offensive have been most clearly articulated in The Guardian by Charlie Brooker and Ally Fogg. Brooker has charged:

It’s all very poignant, if you mentally delete the bit where a supermarket logo hovers over the killing fields, which you can’t. . . . Millions of young men were slaughtered during the first world war – “body-bagged for life”, in Sainsbury’s parlance – and doubtless as they lay dying in foreign fields, gazing down at what remained of their mud-caked, punctured, broken bodies, gasping their final agonised breaths, it would have been a great source of comfort for them to know their noble sacrifice would still be honoured a century later, in an advert for a shop.

What disturbs Fogg the most is the commercial’s very poignancy:

Exploiting the first world war for commercial gain is tasteless. This, however, is not what disturbs me most. The really upsetting details are the stunning shot of the robin on the wire, the actors’ trembles as they cautiously emerge from the trenches, half expecting a sniper’s bullet, the flicker of understanding in the eyes as the young soldiers reach into their pockets at the end. The film-makers here have done something to the first world war which is perhaps the most dangerous and disrespectful act of all: they have made it beautiful.

Professor Mark Connelly, who teaches military history at the University of Kent, has attacked the commercial from a different angle: it contributes to a fundamental misunderstanding of the war.

So far from being typical of the way the armies on the Western Front behaved in 1914, Connelly claims the Christmas truce was exceptional. How did such an extraordinary event come to loom so large in the public imagination? Connelly argues that it dovetails nicely with what has become a prevailing (but inaccurate) memory of the war among the British population: a futile conflict waged incompetently by Britain’s military and political leadership in which young men were compelled to fight against their will. The truce fits within this narrative by indicating that the war was waged by men who bore no hatred for one another and were only forced into the trenches by their governments. Connelly has a point. Although a number of battalions along the front participated in the truce, its observance was extremely spotty, and it did not always revolve around celebrating Christmas (e.g. many units agreed to a truce merely to remove bodies from no-man’s-land).

This entire debate raises a number of questions that transcend World War I. For example, to what extent should commercials and other such productions get history “right”? And at what point do historical events cease to be a source of pain? One Thing after Another considered the former issue in its last post, so let us look at the latter. The question of when historical events are no longer sensitive topics was brought home to One Thing after Another when it encountered the following item: the Teatanic tea infuser. 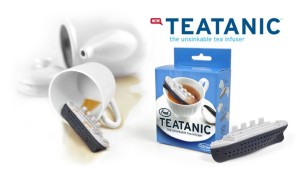 A product blurb has this to say about the Teatanic:

Now this is what we call a novelty product! Not for everyone, but the Teatanic Unsinkable Tea Infuser makes a great gag gift for someone who actually likes tea. It’s supposed to be boatloads of fun as it pays tribute to the Titanic. But unlike the ship, it won’t sink and cause the deaths of about 1502 people. It will only cause a smile to cross your face when you’re about to take the first sip of your favorite tea. To enjoy some tea, just pop the top off the unique Teatanic and stuff its hull with your favorite brand of tea leaves. Then close it up and set it in your mug to steep.

The jolly reference to the deaths of 1502 people suggests that enough time has elapsed so that we shouldn’t feel so very bad about the Titanic‘s sinking. But why should the Titanic‘s demise in 1912 be any less disturbing than the deaths of hundreds of thousands of young men in 1914? After all, One Thing after Another does not remember critics lamenting that the movie Titanic (1997) made the sinking beautiful (in the process of earning millions of dollars). In other words, why do people look at Titanic any differently than at Sainsbury’s Christmas commercial?

The answer appears to be that World War I assumes a much more important place in national narratives than the sinking of the Titanic. As Connelly has claimed, there is a fairly durable memory of the war that sees it not merely as a tragedy but also as an object lesson for the nation. Never again, this lesson goes, should young British men be sacrificed needlessly in large numbers due to the blunders and dishonesty of politicians. This tragic lesson probably seems particularly relevant to the British public since it believes that its country’s military involvement in Iraq and Afghanistan was a terrible mistake. It does not matter to the public that most historians see World War I in a very different light that does not make the conflict immediately relevant to contemporary British foreign policy.

For many Britons, then, using World War I as an opportunity to sell chocolate and the Sainsbury’s brand is an abuse of the conflict’s memory. The sinking of the Titanic, however, is not as central to a national (or any other major) narrative. For that reason, apparently, we can stream Titanic on Netflix as we drink our Teatanic-infused tea from a cup–without any feelings of remorse.